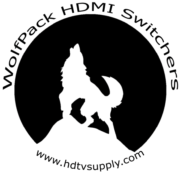 HDTV Supplys WolfPack™ 1080p 12x4 HDMI Matrix HDMI Switch w/4-Separate HDMI Baluns switches both audio and video signals. Because it is a matrix switcher, it allows any input to be routed to any output; or the same input to be routed to all outputs, or any combination. This WolfPack™ 12x4 HDMI Matrix Switch with separate and bundled 4-HDMI Baluns is designed to allow the switching and distribution 12 HDMI inputs to 4 HDMI outputs. It also has optional Crestron Modules & Control4 Drivers.

The Card Cage chassis has 4 - HDMI input slots and 4 - HDMI output slots. The HDMI input and HDMI output cards are 4 - port HDMI cards having 4 - HDMI connectors on each card. If one populates the complete chassis it configures to a 16x16 HDMI Switcher. Shown below is the configuration for this 12x4 HDMI Matrix Switch w/4-separate (TX & RX) HDMI Baluns.

HDTV Supplys WolfPack 1080p HDMI HDMI Baluns that come with this matrix is based upon the HDMI protocol and can transmit an uncompressed HDMI video and audio signal via a single CAT5e/6/7 cable to a maximum distance of 70 meters or 220 feet away from the source depending upon the resolution. The video and audio is not compressed, there is no latency and the audio and video will always be in synch. The HDMI HDMI Baluns have the Power Over Ethernet (POE) design requiring only 1-AC adapter on either the Transmitter or Receiver.

Streaming between the source and display units is easily controlled through our HDMI 12x4 Matrix interface. HDCP key authentication will no longer be an issue when using our switcher. Control for our unit is varied and easily accessible. Enabled RS-232 commands is provided for advanced user control management. It also has optional Crestron Modules & Control4 Drivers.

HEX Codes for the Remote Control

HDTV Supply has successfully installed our WolfPack, WolfPack and our other HDMI Matrix Switchers in Sports Bars, Restaurants, Bowling Alleys, Fitness Centers, Malls, Places of Worship, Data Centers, Gaming Rooms, Nail Salons, County Clubs, Casinos, Factories, Conference Rooms, Schools, Home Theaters or many other installations requiring HDMI matrix switching. The reason, we are told by the users, is the number of features we offer compared to other companies they looked at.

These modular HDMI matrix switcher can usually be integrated with many third party control systems using the RS232 port on the back of the matrix.

For experienced hardware & software professionals who want to write their own drivers for 3rd party control systems from:

...we have created a simple and very easy to use RS232 script to write your own drivers.

END USER: If you are an end user and want to have a whole-house control system from any of the above 3rd party control houses but your budget can't support the price you were quoted, do the following:

CAVEAT: We are not certified by any of the above 3rd party control systems companies nor have the necessary hardware to verify, troubleshoot and support the 3rd party writing of the code. We do warranty, though, that the RS232 script in the above RS232 Users Manual has and will work to control the matrix directly.

Q: If I need to add a new 4-port HDMI card in the future, where can I find them to order?
A: See WolfPack 4-Port HDMI Input & Output Cards for WolfPack Matrices.

Q: Does the matrix support Remote IR (IR Pass-through) from far away rooms?
A: No, but it is operated with an included remote control.

Q: Are the HDMI cards on the WolfPack chassis all the same and can be interchanged within an 8x8, 16x16 and 32x32 chassis?
A: Yes.

Q: We have a 24/7 operation and want to do our own field repair and maintenance, do you have a field repair kit?
A: Yes, it contains the control board, LAN card, power supply, LCD screen, LCD board and all the component to repair the matrix in the field. It doesn't include the metal chassis, nor HDMI cards as you can buy the cards at our site. Call us at 800-841-9238 for details.

Q: Do you have HDMI cards and receivers for the matrix?
A: No, we only have 4K/30 HDMI input and 4K/30 HDMI output cards. See the above optional standalone POE 4K/30 HDMI Baluns which have a Transmitter and a Receiver and one AC adapter. If you need that kind of a matrix see our WolfPack Modular HDMI Matrix Routers w/iPad & Android App.

Q: Do you have a WEB GUI or iOS App for the matrix?
A: No, you use the Front Buttons, Remote control & RS232 to the Control Ins & Outs. If you need that kind of a matrix see our WolfPack Modular HDMI Matrix Routers w/iPad & Android App.

Q: I see a LAN port on the matrix, can that be used?
A: No. The LAN port is in a beta stage and does not work. Do not buy the matrix if you want to operate it on your LAN. Use the Front Buttons, Remote control & RS232 to the Control Ins & Outs. If you need that kind of a matrix see our WolfPack Modular HDMI Matrix Routers with LAN control.

12x5 DVI Matrix Switcher with In & Out Scaling

12x4 DVI Matrix Switcher with In & Out Scaling

12x32 DVI Matrix Switcher with In & Out Scaling