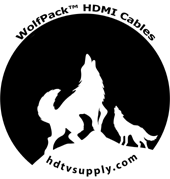 NOTE: All HDMI cables are not made the same and the smaller the diameter (or gauge) of the 19-internal wires an HDMI cable has the more resistance, in ohms, that cable has that can impact the picture quality, especially a 4K signal. HDTV Supply manufactures this WolfPack 20 Foot HDMI Cable using 19-large 24 gauge (AWG) copper internal wires assuring you better video and audio vs smaller diameter 26, 28, 30 and 32 gauge HDMI cables. Always buy a 24 AWG (Gauge) HDMI cable if you want the best picture now and in the future.

The WolfPack 20 foot HDMI 2.0b cable supports 4K @ 50/60 Hz which is 4 times the clarity of 1080p/60 video resolutions and up to 32 audio channels for a surround sound audio as well as simultaneous delivery of dual video streams to multiple users on the same screen, if your devices support it. If your existing cable is not high speed, though, you will need this cable as it supports up to 4Kx2K resolutions up to a stunning 60 Hz and above frame rate.

HDMI transmission is very complex and while there may be little advantage to better cables at short lengths, the need for better cable construction goes up exponentially as length of run, signal bandwidth requirements, and number I/Os goes up. This 20 foot 24 gauge high bandwidth cable is tested to perform at industry standards and is backed by a lifetime warranty.

Manuals
Q/A
Q: What is the difference between a “Standard” HDMI cable and a “High-Speed” HDMI cable?
A: Recently, HDMI Licensing, LLC announced that cables would be tested as Standard or High-Speed cables.

These High Speed (or “category 2”) HDMI 2.0 cables have been tested to perform at speeds of 340Mhz or up to 10.2Gbps, which is the highest bandwidth currently available over an HDMI cable and can successfully handle 1080p signals including those at increased color depths and/or increased refresh rates from the Source. High-Speed cables are also able to accommodate higher resolution displays, such as WQXGA cinema monitors (resolution of 2560 x 1600).

HDTV Supplys HDMI 2.0b Cable is designed and built to the higher standards for your home theater or business use. To demonstrate that HDTV Supply products offers world-class quality HDTV Supply offers the original purchaser a full lifetime hardware warranty on this HDTV Supply product. This means that as long as a customer owns this product and can show original proof of purchase, HDTV Supply, or its supplier, will replace it if it malfunctions. A 30-day RETURN also comes with this warranty as well as Free Lifetime Tech Support.