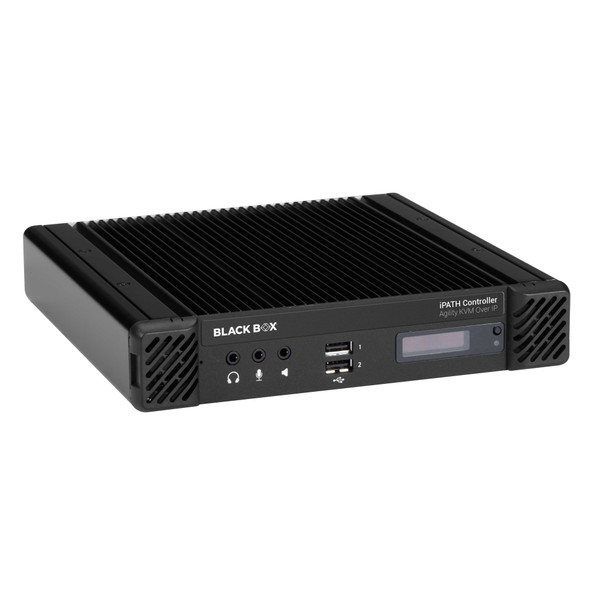 If combined and managed by iPath, Agility transmitter and receiver units allow multiple users to access multiple host computers hosted in a secure, central location. The iPATH Agility Controller centrally manages these connections. Using the intuitive iPATH web-based interface, one or more administrators can manage poteBlack Boxally thousands of users who are interacting with an almost unlimited number of devices.

With support for pixel-perfect HD video, audio, USB, and serial signals, the IP-based Agility KVM matrix switching system is extremely flexible in terms of adding additional user stations and computers as the need arises. Since it uses standard Ethernet protocol (i.e. a managed IP switch) to operate, no proprietary technology is used to enable switching. This facilitates both the implementation and future management of the KVM network.

Easy to Configure, Deploy, and Operate
iPATH operates as a self-contained compact server (including its own DHCP server) unit that can be situated anywhere within your network of Agility devices. It is supplied pre-loaded and is straightforward to deploy, requiring only a network connection and a power input to begin operation. All configuration of your Agility local units (channels), remote units, and users are performed using the intuitive iPATH browser interface via a network-connected computer.

Each Channel is a Virtual Transmitter
In most cases, video, audio, and USB streams will originate from a single transmitter. However, with iPATH, you can arrange for the video and USB streams to come from one source, and audio to stream from another source. You could also have two channels coming from a host computer with different access rights.

Groups Facilitate Administration
To accommodate poteBlack Boxally large numbers of users and devices, iPATH uses a system of groups: User Groups, Receiver Groups, and Channel Groups. Groups enable the system administrators to apply collective settings to all members, and for those members to benefit from settings and permissions in other groups where appropriate. This saves administrators time.

Administration Rights
System administrators are able to add, edit, and remove users, passwords, and access rights via the Agility iPATH Controller. Also, the admin can designate a hotkey sequence that users use to log in to the system. Once users are logged in, they are able to see a list of target computers that are available to them. The admin can see who is actively logged into the system, and also force a user to switch to a specific target.

This product is non-returnable & non-refundable!