has 8-female HDMI inputs a 2x8 = 16-female RJ45 connector outputs. Each output has 2-RJ45 connectors and one or both will be used depending upon the above HDMI receivers you pick. The 8x8 Matrix HDMI Switch over CAT5 has has User Adjustable EDID Learning and allows any of 8 inputs to be routed to any of 8 outputs; or the same input to be routed to all outputs, or any combination. This 8x8 HDMI matrix gives you over 17,000,000 input and output combinations. The 8 - HDMI receivers are unbundled and not included in the price. It also includes a remote control with 18 discrete keys.

The 8x8 Matrix HDMI Switch over CAT5 has a built-in WIFI iPad and Android control as well as the unit has its own WIFI antenna. The size of the matrix is only 1U high & rack mount ears are included. The HDMI input is compensated, clock/phase adjusted and jitter free so all you see is an high quality HDMI signal.

NOTE 1: The HDMI HDBaseT receivers are unbundled so you don′t have to pay for, say 8, if you need only 6. Choose the quantity you need in the above OPTIONS.

NOTE 2: The 8x8 Matrix HDMI Switch over CAT5 extends an HDMI audio and video signal up to ~100 feet with 2-CAT5e cables per output and ~130 feet with 1-CAT5e cable per output at 1080p. CAT6e 23 gauge solid is the preferred cable for this 8x8 Matrix HDMI Switch over CAT5 and will extend the HDMI slightly further. If you distances are longer see a similar iPad controlled 8x8 matrix with unbundled standalone HDMI extenders to 300 feet in the above SIMILAR TAB.

What sets this WolfPack 8x8 Matrix HDMI Switch over CAT5 apart from others:

The 8x8 Matrix HDMI Switch over CAT5 with User Adjustable EDID has 8 standard HDMI inputs and 8 standard HDMI outputs. An Intelligent EDID learning function is added to increase its compatibility to any HDTV, unlike cheaper units that you have to guess their compatibility. Intelligent EDID learning is only found in professional HDMI switchers and never less than $5,000, as this costs. Control of this switcher can be managed via its front-panel control, an iPad, IR remote control, RS-232, or our optional RS-232 to Ethernet Converter. The RS-232 to Ethernet Converter allows control of the unit from anywhere in the world given you know how to write RS-232 code and have the correct serial Ethernet hardware. The 8x8 Matrix HDMI Switch over CAT5s RS-232 control allows the switcher to also be controlled by 3rd party control systems like Crestron, Control4, and many computerized software/hardware control systems using its RS232 control..

Why not buy a WolfPack 8x8 Matrix HDMI Switch over CAT5 today?

Software
The software that is supplied on a CD when you get the matrix is also available at https://www . dropbox . com/s/cwq503rt6zk7o9s/HDTVSXMX88 Software . rar

The above Dropbox link needs to be compressed to take out the spaces as we don't put executable files on our site for your virus safety. Your UnZip program will also need to support RAR.

Custom Control: Since this device has an industry compatible RS232 port it has the potential to be controlled by Home Automation controllers from Control4, RTI, AMX, Savant, BitWise, ControlFX and DemoPad, Crestron, NetStreams, Opus, and Elan as well as other compatible controllers. Contact the above to discuss how they interface with the RS232 serial port on this device.
Accessories
Compatibility
NEED HELP...See our POPULAR LARGER HDMI MATRIX COMPARISON SHEET to help you make a decision. Need more help? Just call our tech support at 800-841-9238 to discuss your application.

This 8x8 Matrix HDMI Switch over CAT5 is compatible with:

The software that is supplied on a CD when you get the matrix is also available at https://www . dropbox . com/s/cwq503rt6zk7o9s/HDTVSXMX88 Software . rar

The above Dropbox link needs to be compressed to take out the spaces as we don't put executable files on our site for your virus safety. Your UnZip program will also need to support RAR.

Q/A
Q: I don't see any video from my PC with HDMI outputs.
A: See your 8x8 Matrix HDMI Switch over CAT5 manual and set the EDID to the EDID LEARNING Mode.

Q: Tell me more about the industrial design of this 8-8 HDMI Matrix.
A: The unit is designed to work reliably in hostile environments like shop floors, steel racks and mobile environments. To keep the four internal heat sinks cool 2-fans are incorporated on the side of the matrix to keep the internal components cool and which may be objectionable in home settings because these fans generate some amount of wind as well as a moderate amount of noise. If you are using a cabinet or rack or your TV sound would mask the noise you should be OK.

Q: How do I install the Android app to my Android devices?
A: The app is not in the Google Playstore but on the CD that comes with the matrix. Do the following: 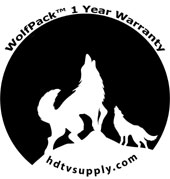 HDTV Supply includes a 1 Year Limited Warranty on this 8x8 HDMI Matrix Switch Over CAT5. The warranty states that (a) its products will perform substantially in accordance with the accompanying written materials for a period of 1 year from the date of receipt and (b) that the Product will be free from defects in materials & workmanship under normal use & service for a period of 1 year. In order to get a warranty replacement for a defective item, HDTV Supplys Support Team will verify the product is eligible for warranty. An RMA number will then be issued. Shipped replacements will be in like new conditions, tested and all components included. A 30-day RETURN also comes with this warranty. HDTV Supply created our unique line of WolfPack line of products which are born from a hungry, circling pack of high performance video and audio HDMI that surround our competition to devour them. The WolfPack family is sleek, unique & swift & even the smallest configuration wolf can adapt himself to many hostile environments.

The Wolfpack family can roam long distances even some up to 300 feet over HDBaseT trails and howl 4K whereas those who try to trap the WolfPack fails & runs away to the older devices.

Why not buy one of HDTV Supplys WolfPack products today?