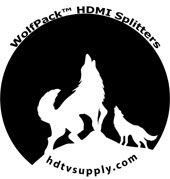 HDTV Supplys WolfPack 1x10 HDMI Splitter uses a single HDMI source and send it to ten HDMI TVs. It allows one HDMI device to be split easily to ten HDMI compatible monitors or projectors. In addition，it can be placed at the end of a long HDMI cable to regenerate the HDMI signal. The resolution of this HDMI splitter can be up to 4K or 3840x2160/30Hz.

HDTV Supplys WolfPack 1x10 HDMI Splitter is the perfect solution for anyone who needs to send one source of digital high definition video to multiple displays at the same time. It supports all HDMI equipment, such as DVD players and satellite set top boxes and all HDMI displays. HDMI (High-Definition Multimedia Interface) is a digital point to point interface for audio and video signals.

A 8-level User Adjustable EDID learning function is added to increase its compatibility to any HDTV, unlike cheaper units that you have to guess or drops their EDID that causes problems with older TVs, HDMI to CAT5 extenders, long boosted HDMI cables and mixed TV resolutions.

In operation, the digital video source is connected to the distribution amplifier on one side. On the other side, ten HDMI outputs are available to be used in part or in full. Once the unit is connected and powered, your source is routed to up to ten digital displays at the same time.

For home theater applications, the unit is HDCP (high bandwidth digital content protection) compliant, making it effective for use with all HDMI displays. HDCP is a standard "key" encoded into the HDMI signal to prevent video data from being pirated. HDCP was strongly endorsed by the entertainment industry. If a source device is HDCP coded and is connected to a HDMI display or projector via HDMI without the proper HDCP decoding mechanism, the picture is relegated to "snow" or in some cases, a very low (480P) resolution. In order to see protected content, the source, the display and any device in between must be equipped with HDMI connections that can enable HDCP using "software key" decoding.

How It Works: Simply connect your HDMI video source to the WolfPack 1x10 HDMI Splitter input using the supplied HDMI cable. Then connect up to ten HDMI displays to the unit's ten HDMI outputs. Once connected and powered, your source will be seen on all ten displays at the same time.

Why not buy this WolfPack 1x10 HDMI Splitter today?

Specs
This splitter supports an EDID management function and comes with ten kinds of EDID modes allwoing the users to choose according to their own needs. In addition, this product is also built-in IR extension function, can work with our HDMI repeater which has IR-RX receiving the IR command to control the source.

Why not buy this 1x10 HDMI Splitter today?

X 0 0 1 : compatible with minimum resolution of the TV display

1 is used for upgrades, 1 is upgrading mode, 0 is normal operation mode
Reviews
Similar
Make Offer
Manuals
USERS GUIDE
Q/A
Q: Will this 1x10 HDMI Splitter with EDID with only one display turned ON?
A: Yes, the ten outputs are independent and the 1x10 HDMI Splitter works even when only one display is turned ON. Many HDMI splitters have synchronized outputs which require all displays to be turned ON at the same time for those splitters to work.

The 1x10 HDMI Splitter with User Adjustable EDID will mix the EDID data of all connected sink devices like a widescreen and send this mixed EDID to the HDMI source device. EDID mixing allows all all the connected sink device to have video and audio they can display or output.

FAQ
To ensure 3D Blu-ray or 4K content is routed via this device, High Speed HDMI cables must be used and any connected non-3D or non-4K compatible display must not have an "active" HDMI output (i.e. powered off or in standby mode). The 4K or 3D source player must not be able to "see" a 2D or non-4K only display connected to the unit.

Read more at WHAT I NEED TO KNOW ABOUT EDID
Government